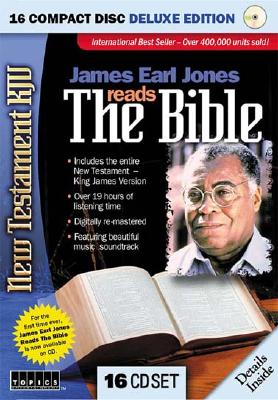 With a voice as rich as it is recognized, James Earl Jones brings The King James Version of The New Testament alive with his narrative talents. Oscar nominated, Emmy and Tony Award winning actor James Earl Jones has earned a worldwide reputation as one of the worlds most versatile actors and voiceover artists. In over 19 hours on 14 digitally re-mastered compact discs, James Earl Jones Reads The Bible interprets the most enduring book of our time utilizing the acclaimed actors super storytelling and skilled characterizations. James Earl Jones, who includes in his credits The Lion King, Patriot Games and Star Wars, has provided what is hailed as the greatest spoken-word Bible version ever. With over 500,000 copies sold, this exquisite audio treasure is certain to entertain and inspire.