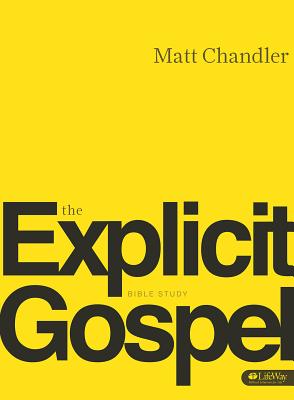 The Explicit Gospel - Member Book provides six weeks of Bible study content, learning activities, and group experiences. In an explanation that embraces the whole of Scripture, Matt Chandler defines what the gospel is -- and what it is not. Written with Chandler's weighty and yet immediately understandable style, this Bible study includes the specifics of the gospel as well as its fullness, clearly outlining its massive implications on both personal and cosmic levels.

Author:
Matt serves as Lead Pastor of Teaching at The Village Church in Flower Mound, TX. He has served in that role since December 2002 and describes his tenure at The Village as a re-planting effort where he was involved in changing the theological and philosophical culture of the congregation. The church has witnessed a tremendous response growing from 160 people to over 10,000 with campuses in Flower Mound, Dallas and Denton. Alongside his current role as lead pastor, Matt is involved in church planting efforts both locally and internationally through The Village and various strategic partnerships. Prior to accepting the pastorate at The Village, Matt had a vibrant itinerant ministry for over 10 years where he spoke to thousands of people in America and abroad about the glory of God and beauty of Jesus. His greatest joy outside of Jesus is being married to Lauren and being a dad to their three children, Audrey, Reid and Norah. Recently, Matt was named president of Acts 29, a worldwide church-planting organization.Over the last 10 years, Acts 29 has emerged from a small band of brothers to over 400 churches in the United States and networks of churches in multiple countries. Matt speaks at conferences throughout the world and has written a book, The Explicit Gospel, published in April 2012.