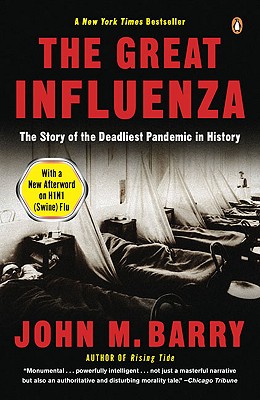 The Great Influenza: The Story of the Deadliest Pandemic in History

The definitive account of the 1918 Flu Epidemic. "Monumental"-Chicago Tribune.

At the height of WWI, history's most lethal influenza virus erupted in an army camp in Kansas, moved east with American troops, then exploded, killing as many as 100 million people worldwide. It killed more people in twenty-four months than AIDS killed in twenty-four years, more in a year than the Black Death killed in a century. But this was not the Middle Ages, and 1918 marked the first collision of science and epidemic disease. Magisterial in its breadth of perspective and depth of research and now revised to reflect the growing danger of the avian flu, The Great Influenza is ultimately a tale of triumph amid tragedy, which provides us with a precise and sobering model as we confront the epidemics looming on our own horizon. John M. Barry has written a new afterword for this edition that brings us up to speed on the terrible threat of the avian flu and suggest ways in which we might head off another flu pandemic.

Title: The Great Influenza: The Story of the Deadliest Pandemic in History

The Great Influenza: The Story of the Deadliest Pandemic in History