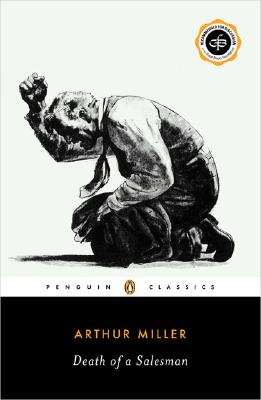 Death of a Salesman (Penguin Classics)

The Pulitzer Prize-winning tragedy of a salesman's deferred American dream

Since it was first performed in 1949, Arthur Miller's Pulitzer Prize-winning drama about the tragic shortcomings of an American dreamer has been recognized as a milestone of the theater. Willy Loman, the protagonist of Death of a Salesman, has spent his life following the American way, living out his belief in salesmanship as a way to reinvent himself. But somehow the riches and respect he covets have eluded him. At age 63, he searches for the moment his life took a wrong turn, the moment of betrayal that undermined his relationship with his wife and destroyed his relationship with Biff, the son in whom he invested his faith. Willy lives in a fragile world of elaborate excuses and daydreams, conflating past and present in a desperate attempt to make sense of himself and of a world that once promised so much. This Penguin Classics edition features an introduction by Christopher W. E. Bigsby.

For more than seventy years, Penguin has been the leading publisher of classic literature in the English-speaking world. With more than 1,700 titles, Penguin Classics represents a global bookshelf of the best works throughout history and across genres and disciplines. Readers trust the series to provide authoritative texts enhanced by introductions and notes by distinguished scholars and contemporary authors, as well as up-to-date translations by award-winning translators.

Death of a Salesman (Penguin Classics)