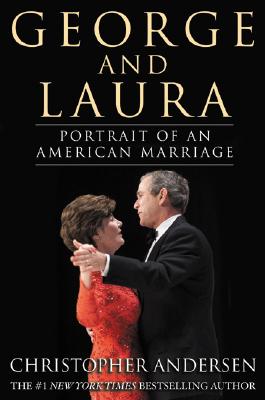 George and Laura: Portrait of an American Marriage (Bookclub)

They would be called upon to lead a nation in one of its darkest hours -- but were they up to the task? He had been the wild, hard-drinking scion of one of America's premier political families. She was the school librarian with a warm smile and a tragic secret of her own. Yet after the terrorist attacks of September 11, 2001, they rose to the challenge: He became the embodiment of America's fighting spirit and she assumed the role of "First Comforter" with effortless grace. Still, the true nature of their relationship has remained a mystery.

Until now. In the style of his #1 "New York Times bestsellers "The Day Diana Died and "The Day John Died, as well as his bestselling books about another President and First Lady, "Jack and Jackie and "Jackie After Jack, Christopher Andersen draws on important sources -- many speaking here for the first time -- to paint a vivid, sometimes startling, often inspiring portrait of America's First Couple. Among the intriguing insights and stunning revelations: Important new information about 9/11 and its aftermath -- including a gripping moment-by-moment account of how the President and First Lady coped as the horrific drama unfolded. The true extent of George W.'s drinking problem, the strains it put on his marriage, and the ultimatum that changed his life -- and the course of history. Their heartbreaking battle against infertility and how close Laura came to dying in childbirth. The early tragedies that shaped them, including the car crash caused by a teenage Laura that took the life of a former boyfriend -- and changed her life forever. Laura's surprising behind-the-scenes influence on U.S. policy -- foreign and domestic. The pressures of raisingheadstrong twin daughters in the glare of the media -- and how 9/11 has brought the Bushes and their children closer together than ever before.

"George and Laura is a compelling look at their unique partnership, and the courage, grace, and humor that defines it. It is a stirring wartime saga of triumph and tragedy and, above all, a uniquely American love story.

Title: George and Laura: Portrait of an American Marriage (Bookclub)

George and Laura: Portrait of an American Marriage (Bookclub)