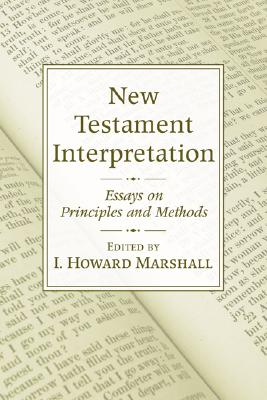 By: Marshall, I. Howard

These eighteen pieces have been commissioned to provide a succinct yet comprehensive guide to the best of recent evangelical thinking about how the New Testament is to be interpreted, so that it may speak most clearly to today's world. The need for such a handbook can be felt more keenly as on the one side a secularized world dismisses the biblical faith as outmoded, unworkable, and unsatisfying; and, on the other, numerous Christian communities, committed to taking that faith with ultimate seriousness, are driven by controversies about how to read and understand the Bible. Following the editor's introduction, in which I. Howard Marshall examines a familiar New Testament passage in order to exemplify the problems and rewards that await the careful interpreter, the essays are arranged under four headings, beginning with overviews of the history of New Testament study and the role of the interpreter's presuppositions in this enterprise; then going on to discuss the various critical tools, the methods of exegesis, and the application of the New Testament to the faith and life of the contemporary reader. An annotated bibliography concludes the presentation. Because the issues involved here have too often been ignored in many quarters, more than one approach to or opinion about a given matter may surface in these essays; yet, undergirding this diversity is the author's shared conviction, as conservative evangelicals with a high regard for the authority of Holy Scripture, that we are called upon to study the Bible with the full use of our minds. As the editor writes, The passages which we interpret must be the means through which God speaks to men and women today. Our belief in the inspiration of the Bible is thus a testimony that New Testament exegesis is not just a problem; it is a real possibility. God can and does speak to men through even the most ignorant of expositors of his Word. At the same time he calls us on to devote ourselves to his Word and use every resource to make its message the more clear. I. HOWARD MARSHALL is Emeritus Professor of New Testament Exegesis at the University of Aberdeen in Scotland where he has taught since 1964. He is also president of the British New Testament Society, member of the Committee on Bible Translation, and chair of the Tyndale Fellowship for Biblical Research. Marshall's teaching that salvation can be lost was instrumental in Clark Pinnock's departure from Calvinism. His other books include 'I Believe in the Historical Jesus', 'Jesus the Savior', and 'Kept by the Power of God.'