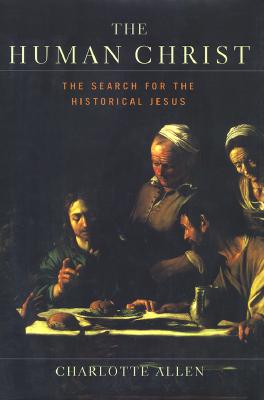 The HUMAN CHRIST: THE SEARCH FOR THE HISTORICAL JESUS

The quest for the historical Jesus -- the human figure who became Christ -- has preoccupied the Christian world for centuries. Since the Renaissance, as belief in science has increasingly threatened the dominance of faith, scholars and philosophers have endeavored to uncover the truth of this man's life. Their conclusions have always revealed far more about themselves than the meaning of Jesus, and, as Charlotte Allen now shows in this bold and sweeping book, they nearly always missed the most fundamental human reality of the man whom Christians call the Son of God: he was born of a Jewish mother into a Jewish community. The story of the search for the historical Jesus is a tour through the great and terrible ideas of modern Western civilization. The Human Christ is the first chronicle of this quest from its beginnings to the present day. It describes the different -- yet amazingly similar -- Jesuses that have emerged over the past 300 years: Jesus the deist rationalist of the 18th-century English coffee houses; Jesus the Hegelian synthesizer of Judaism and Hellenism of the early 19th century; Jesus the mythologized moralist of David Friedrich Strauss; Jesus the romantic universalist of Ernst Renan; Jesus the apocalypse-obsessed madman of Albert Schweitzer; and Jesus the Cynic-like sage of the late 20th century. In addition, Allen focuses on the huge life-of-Christ industry that has flourished in novels and films, revealing it to be a heady combination of piety, exotica, and even soft-core pornography. Finally, Allen explores the efforts of Jewish and Gentile scholars to locate Jesus' place in first-century Judaism, the environment in which he actually conducted hisministry. Many books have claimed to identify who the historical Jesus really was, but this is the first to expose what the quest for the historical Jesus has really been about. For generations, scholars, intellectuals, novelists, and filmmakers have set out to find the real Jesus and have come up with mirror images of themselves. Their efforts amount to an exercise in theology rather than history and one that tells more about the intellectual and popular fads of their time than it does about Jesus. While Allen debunks these rationalistic approaches to Jesus, she has not abandoned useful historical methods. Guided by an unwavering acceptance of religious mystery, she has exhaustively researched and referenced her work. This approach to the divine is a way to free authentic spirituality from the chains of intellectual fashion. Now readers with an interest in the man at the center of Christianity but little interest in dogmatic historians can enjoy an authoritative, superbly written, and powerfully independent perspective on what it has meant -- and what it means -- for God to become flesh.

Title: The HUMAN CHRIST: THE SEARCH FOR THE HISTORICAL JESUS

The HUMAN CHRIST: THE SEARCH FOR THE HISTORICAL JESUS