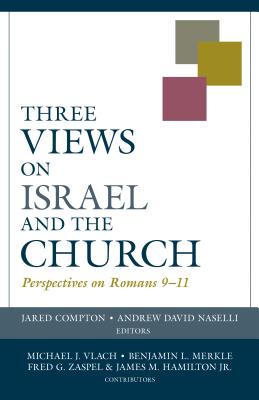 Three Views on Israel and the Church: Perspectives on Romans 9â€“11 (Viewpoints)

The relationship between Israel and the church is a long-standing debate in Christian theology, and Romans 9-11 are the most important chapters for understanding it. How one interprets these chapters determines how one understands biblical theology, how the New Testament uses the Old Testament, and how the old and new covenants are related. To help readers draw their own conclusion, four leading scholars on this issue present a case for their viewpoint, followed by a response and critique from the others. Michael Vlach argues for a future mass conversion and a role for ethnic Israel in the church. Fred Zaspel and Jim Hamilton present a case for a future mass conversion that does not include a role for ethnic Israel. And Benjamin Merkle contends that Romans 9 - 11 promises neither a future mass conversion nor a role for ethnic Israel. General editor Andrew David Naselli helpfully sets the debate in its larger biblical-theological context in the introduction, while Jared Compton provides a useful summary of the views and interactions at the end of the volume.

Title: Three Views on Israel and the Church: Perspectives on Romans 9â€“11 (Viewpoints)

Three Views on Israel and the Church: Perspectives on Romans 9â€“11 (Viewpoints)