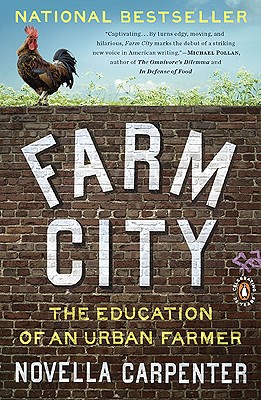 Farm City: The Education of an Urban Farmer

"Captivating... By turns edgy, moving, and hilarious, Farm City marks the debut of a striking new voice in American writing." --Michael Pollan, author of The Omnivore's Dilemma and Food Rules When Novella Carpenter--captivated by the idea of backyard self-sufficiency as the daughter of two back-to-the-earth hippies--moves to a ramshackle house in inner-city Oakland and discovers a weed-choked, garbage-strewn abandoned lot next door, she closes her eyes and pictures heirloom tomatoes, a beehive, and a chicken coop. What starts out as a few egg-laying chickens leads to turkeys, geese, and ducks. And not long after, along came two 300-pound pigs. And no, these charming and eccentric animals aren't pets. Novella is raising these animals for dinner. An unforgettably charming memoir, full of hilarious moments, fascinating farmer's tips, and a great deal of heart, Farm City offers a beautiful mediation on what we give up to live the way we do today.

Title: Farm City: The Education of an Urban Farmer

Farm City: The Education of an Urban Farmer