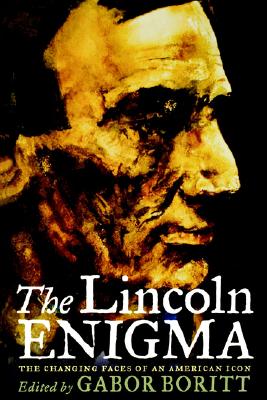 The Lincoln Enigma: The Changing Faces of an American Icon

In The Lincoln Enigma, Gabor Boritt invites renowned Lincoln scholars, and rising new voices, to take a look at much-debated aspects of Lincoln's life--including his possible gay relationships, his plan to send blacks back to Africa, and his high-handed treatment of the Constitution. Boritt explores Lincoln's proposals that looked to a lily-white America. Jean Baker marvels at Lincoln's loves and marriage. David Herbert Donald compares Lincoln and Jefferson Davis as Commanders-in-Chief. Douglas Wilson shows us the young Lincoln--not the strong leader of popular history, but a man who struggles to find his purpose. Gerald Prokopowicz searches for the military leader, William C. Harris for the peacemaker, and Robert Bruce meditates on Lincoln and death. In a final section Boritt and Harold Holzer offer a fascinating portfolio of Lincoln images in modern art. Acute and thought-provoking in their observations, this all-star cast of historians--including two Pulitzer and three Lincoln Prize winners--questions our assumptions of Lincoln, and provides a new vitality to our ongoing reflections on his life and legacy.

Title: The Lincoln Enigma: The Changing Faces of an American Icon

The Lincoln Enigma: The Changing Faces of an American Icon