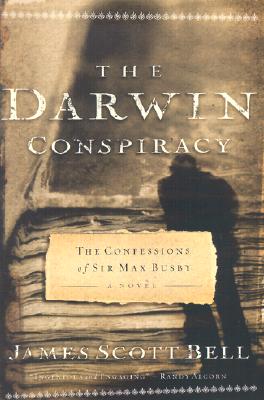 The Darwin Conspiracy: The Confessions of Sir Max Busby

For years, a young attorney named James Scott Bell was haunted by the possible existence of a fabled manuscript by one Sir Max Bushy, a mysterious figure in the lore of evolution. It was rumored that in the 1920's, Sir Max had taken to paper his own account of "the cultural takeover of evolution" but no such document had surfaced.

After years of diligent thought and research, Bell determined that the case for Darwinism was virtually nonexistent. He had successfully exorcised the ghost of Bushy from his mind until a fateful editorial appeared in the Los Angeles Times.

A poorly inaccurate account on the matter of origins, Bell responded with a letter bemoaning the "almost giant conspiracy existing] among naturalistic scientists and a willfully blind media." That letter prompted the phone call and the meeting. Someone wanted to meet the author of that letter. A meeting that would find the Bushy manuscripts being placed in the young attorney's hands.
-- An intriguing plot that creatively draws the reader in to reveal the inadequacies of Darwinism as a scientific theory, and its inexplicable influence over the scientific world and media.

Title: The Darwin Conspiracy: The Confessions of Sir Max Busby

The Darwin Conspiracy: The Confessions of Sir Max Busby